"Much beloved she gave herself for others during the Great War".

Monika Mary Nightingale was 14 at the time of the 1911 census.  She lived with her mother, father and her little 6-year-old brother Bernard in a house on Sutton Common Road.  Her father, Frederick, was a Bank Clerk working for the National Bank and her mother, Mary, was a housewife.   They had named their house Luscinia which is a play on their surname as Luscinia is the genus of birds to which the nightingale belongs.  The family had lived previously at Rose Cottage on the Green at Benhilton when they had first moved to Sutton in 1893.

Monika had been called 'Nonnie' when she was little and that's the name she gave the census taker when they came to the house when she was 4.

Monika had another brother called Cyril Frederick Brock Nightingale who was 3 years older than her.  By the time of the 1911 census he had left home and was living elsewhere.

During the Great War (1914-1918), large numbers of women were recruited into jobs vacated by men who had gone to fight in the war. New jobs were also created as part of the war effort, for example in munitions factories. 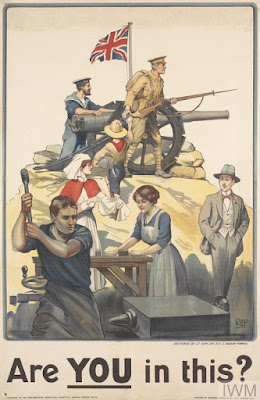 Though there was initial resistance to hiring women for what was seen as 'men's work', the introduction of conscription in 1916 made the need for women workers urgent. Around this time, the government began coordinating the employment of women through campaigns and recruitment drives. 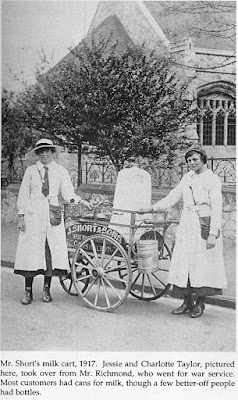 More than a million women took the chance to join the workforce. They worked across the economy - from tram drivers and train cleaners, to postal workers and police patrols. 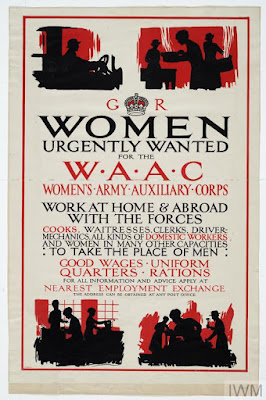 In 1914 the seventeen-year-old Monika Nightingale would have had every expectation and opportunity to be of service to her country.

1918 saw the advent of votes for women and even as men returned home from the war and displaced women from the roles that they had occupied a fundamental shift had taken place in society.  But this was not a change that Monika would be able to enjoy.

I had a little bird
Its name was Enza
I opened the window,
And in-flu-enza.

The influenza pandemic of 1918-19 claimed the lives of between 20 and 40 million people around the world, at least three times the number killed in the war.

The flu reached London in the June of 1918.  Unlike ordinary seasonal flu, which was worst in the elderly, weak and sick, the new illness disproportionately struck those aged 20 to 30. Young adults with the strongest immune systems were, unexpectedly, the most vulnerable.

Monika died on Christmas day in 1919.    The quotation on the plaque that commemorates her is an adaptation from Revelation 14:13

"And I heard a voice from heaven saying unto me, Write, Blessed are the dead which die in the Lord from henceforth: Yea, saith the Spirit, that they may rest from their labours; and their works do follow them."