The image below shows the Church as it was a few years before it was rebuilt in 1864. 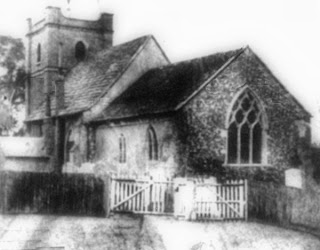 The old St Nicholas Church was described as it was in 1850 in the book "A Topographical History of Surrey".  This was written by John Britton and Edward William Brayley.

The old church was small.  It was only 69 feet (21m) long and 37 feet (11m) wide and had undergone many changes during its history.   It was partially in the decorated English style and as the picture shows it had windows with closely spaced parallel mullions (vertical bars of stone) which went up to the level at which the arched top of the windows began. The mullions branched out and crossed and intersected to fill the top part of the window with a mesh of elaborate patterns called tracery.

The old church had a square tower of brick containing two bells which had replaced the old wooden tower sometime before 1792.  The two bells were both by Thomas Mears of  the Whitechapel Bell Foundry and dated 1841.

Its roof was covered in overlapping thin squares of flaky stones mortared into position.  These stone slabs varied between 18 and 24 inches square. That is about 45cm to 60cm in size.  The exterior walls of the church, especially the east end, were faced in flint.

The old church was divided into two parts, the chancel and the nave.  You can see this division in the picture above.  The chancel is end of the church nearest to us in the picture. This is the east end of the Church. Inside the church the chancel was raised by 3 steps.  Within the rails of the communion table at the east end were the tombs of Henry Wyche and George Roberts, both former rectors. The former died in 1678, the latter in 1686.

The people attending church would sit in the nave.  It was very crowded and to allow as many people to fit into church raised galleries had been added at the west end of the church and on its north side. With people sitting downstairs and upstairs the church could fit a congregation of about 400 people.  The old church didn't have an organ so people had to sing the psalms unaccompanied during services.

The pulpit which was used by the Rector or curate to preach the sermon was square and painted in imitation of wainscot (high quality wooden panelling) and fixed against the south wall of the nave.

The font, used for baptism, was small and made from stone and was in amongst the pews near the vestry in the north east corner of the nave.

The walls of the church were covered in monuments and charity boards.  These were all transferred to the new church.

The little church was kept in good order and it was described by in 1850 as having a 'very neat appearance'.

This last image is an engraving of the old Church viewed from the northside.  It is from Charles Cracklow's 'Views of all the Churches and Chapelries in the County of Surrey' that was published in 1827 to accompany Manning and Bray's History of Surrey. 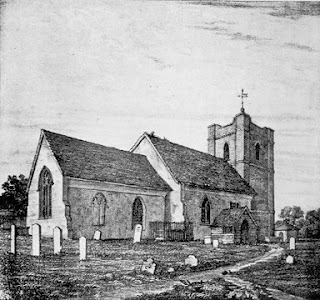