The growth of the population of Sutton following the arrival of the railway in 1847 meant that the old parish church of Sutton was not longer able to cope.

The ancient parish of Sutton was divided in 1863 and a new Parish of All Saints was created out of the northern half of the parish.  The construction of the church of All Saints Benhilton began in 1863 and was consecrated in 1866.

The decision to rebuild the St Nicholas Church was made at a vestry meeting on 8 May 1862 when a committee to manage the project was appointed.  The building began the same year and the new building was consecrated on 17th February 1864.  It is now a grade II listed building (1974). 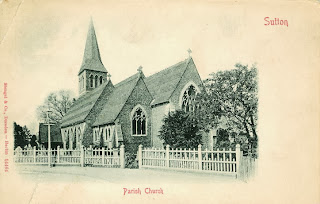 The building was designed by Edwin Nash FRIBA (1814 – 1884) whose son lived in Sutton Common Road.  The church is in the style of 13th century Gothic and the construction cost £7,200.  This would be about £4,450,000.00 today (2014) using increases in average earnings. The west end has a square tower, surmounted with a wooden spire with oak shingles.

The south porch has an inscription on the bargeboard: "How amiable are thy dwellings thou Lord of Hosts"

The walls are of flint with stone cornering and the windows are also set in stone. The exterior roofs of the chancel and nave are of red tiles.  The red of the roofs contrast with the dark flint walls and the pale stone.

The nave has north and south aisles with two rows of stone pillars with capitals decorated with carved foliage and animals.  The interior walls were whitewashed.

The chancel is 34 feet (10m) by 19 feet (6m) with aisles either side separated from the body of the chancel by semi-screens of light ironwork of black with gilded highlights between pillars of polished Cornish marble.

The original pulpit was of stone decorated in a similar style as can be seen in the image below that dates from 1907. 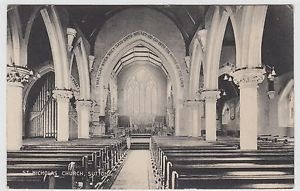 The side aisles were originally used for seating.  In 1893 there were some major changes made to the church.  The organ was installed and a new vestry was built with clergy and choir rooms. In addition a large basement was added for the organ blowing plant and the north porch was built.  The organ was final installed in 1899 by the firm Norman and Beard of Norwich.

By 1914 when the image below was taken the original stone pulpit had been replaced by the current wrought iron one and a new chancel screen had been added to match the remaining screen on the south side of the chancel. 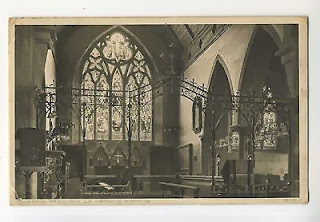 In the chancel is a reredos of white and yellow alabaster and stone.  The design is taken from the vision of the Apocalypse.  The reredos is recessed and has three arches.  The central figure is that of the Lamb in the midst of the throne.  Beneath his feet is the rainbow, and he bears a flag of victory.  On each side of the central figure are two angels kneeling in adoration.  Over the arches are 4 heads which represent Jesus as Redeemer, Prophet, Priest and King.

The original painting scheme has been covered.  The east wall of the chancel below the window was originally painted blue and was covered in gold stars.  On the left hand side at the top corner was the Greek letter 'alpha' and on the other side 'omega'.  Running across the wall and divided by the reredos was the text 'Blessed are they that are called to the marriage supper of the Lamb'.

The new church was heated by hot water pipes and lit by gas.  The gas pipes were carried round the capitals of the pillars in the body of the church and along the tops of the iron screens in the chancel.  The pipes lead to numerous small jets which were said to 'give a good light and have a very pleasing effect'.  (Church's Illustrated Sutton 1880)

In the 1920s the southern aisle of the chancel was converted from seating into a Lady Chapel.  The small stone bowl on the column to the right of the picture is a piscina used for washing vessels during Mass.  It was discovered in the churchyard in the 1920s and would have been removed from the medieval church during the time of the reformation in the mid 16th century. 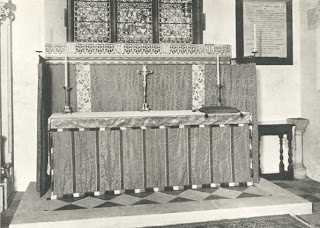