The Growth of Sutton

At the start of the 19th century Sutton was a small village.  The 1811 census counts 638 souls, half of whom worked on the land.

The old parish was approximately 3 miles long (north to south) and 1 mile wide (east to west) and comprised 1768 acres of land which were chiefly arable.  At south of the parish there were extensive chalk downs on which between 200 and 300 sheep were annually reared.  According to 'A Topographical Dictionary of England' (1848)these were "remarkable for their small size and superior flavour". 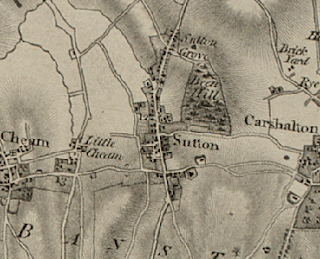 The soil in the northern part is clay with an intervening narrow tract of Thanet sand.  Nearly all of the houses in the parish were north of what is now the Cheam and Carshalton Roads because above those there were no sources of fresh water.

Major population growth happened after Sutton railway station was opened by the London, Brighton and South Coast Railway (LB&SCR) on 10 May 1847.  Sutton was on the line from West Croydon to Epsom. Further connections to Epsom Downs and to Mitcham Junction were planned and would be built in the 1860s. The image below shows Sutton Railway Station in 1905. 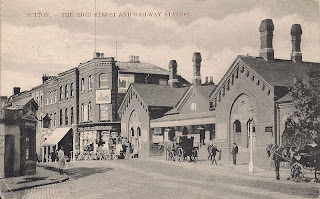 It became obvious that the rapid growth of the population of Sutton meant that the old parish church of Sutton would no longer be able to cope.

Another important factor in the rapid population growth was the availably of plumbed water supplies.  The Sutton Water Company was incorporated in 1863, and the provision of water mains allowed houses to be built up onto the chalk land at the southern end of the parish. The Lord of the Manor at the time, Mr Alcock, sold land that was previously unsuitable for residential buildings, making it available for new construction. 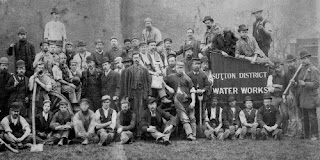 The ancient parish of Sutton was divided in the same year and a new Parish of All Saints was created out of the northern half of the parish.  The construction of the Church of All Saints Benhilton began in 1863 and was consecrated in 1866.

Construction of the new St Nicholas Church started in 1862 ahead of the split of the old parish and was completed in 1864.