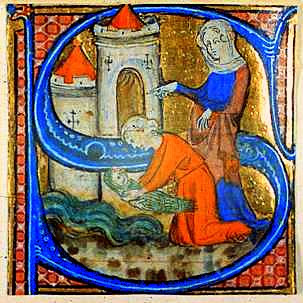 Image: A capital S contains a miniature of Moses being found by the Pharaoh's daughter. Friom folio 6r from the Breviary of Chertsey Abbey, a 14th century illuminated manuscript.

The church building was the physical property of the manor.

The core of the church in Nicholas de Heddeshore's time would have been the chancel with the altar, and this belonged to the Abbot. The nave and tower belonged to the people of the parish who stood in the nave to hear services.

From "The Symbolism of Churches" by William Durand (c.1286)

The church consisteth of four walls, that is, built on the doctrine of the foure Evangelists; and hath length, breadth, and height: the height representeth courage; the length fortitude, which patiently endureth till it attaineth its heavenly Home; the breadth is charity, which, with long suffering, loveth its friends in God, and its foes for God; and again, its height is the hope of future retribution, which despiseth prosperity and adversity, hoping to see the goodness of the lord in the land of the living.

Again, in the Temple of God, the foundation is Faith, which is conversant with unseen things: the roof, Charity which covereth a multitude of sins. The door Obedience, of which the Lord saith, If thou wilt enter into life, keep the commandments. The pavement, humility, of which the Psalmist saith, My soul cleaveth to the pavement...

The glass windows in the church are Holy Scriptures, which expel the wind and rain, that is all things hurtful, but transmit the light of the True Sun, that is God, into the hearts of the Faithful. These are wider within than without, because the mystical sense is the more ample, and precedeth the literal meaning. Also by the windows the senses of the body are signified: which ought to be shut to the vanities of this world, and open to receive with all freedom spiritual gifts...

The congregation would have usually stood or knelt during the service. The Latin of the Mass itself would have been unintelligible for most of the people. There was very little preaching until the thirteenth century when the orders of friars, the Franciscans and Dominicans gradually spread the habit. So a parish priest like Nicholas de Heddeshore living at the end of the thirteenth century may have often provided his congregation with homilies and sermons in English.

But the congregation were mainly passive witnesses to a dialogue between the priest and God. Nicholas de Heddeshore like all the priests up to the reformation would have celebrated Mass with his back to the congregation. The congregation would show their devotion to the Eucharist when the little sanctus bell was rung at the singing of the Sanctus and again when bread was elevated at the consecration, rather than actually receiving Communion.

The parishioners of Sutton knew they were expected to attend Mass weekly, but the papal decree of 1215 which made once yearly Communion mandatory would suggest that the expectation was more honoured in the breach than the observance. It is likely that in an agricultural community like pre-industrial Sutton the need to take advantage of fine weather to carry out certain work like harvesting would have meant that many folk skipped services at least sometimes.

For the villagers of Sutton, the church was the main source of information. The scriptures illustrated holy themes, recalled the work of the seasons and pointed morals. Images of Biblical tales would have covered the walls and from stained glass windows. The news of the world, both holy and secular came from the pulpit.


The church would have been used for dinners at festival times, and the churchyard was also a place for parties, plays, pageants and games such as football and tile and stone throwing.

The church was a place of business. The manor courts may have been held in the nave, there may have been a safe deposit box behind the altar, and journeys would have begun and ended at the church door. When news came from London and elsewhere it would have come first to the church and then been shouted through the village. The medieval village would have have been within the range of the human voice.