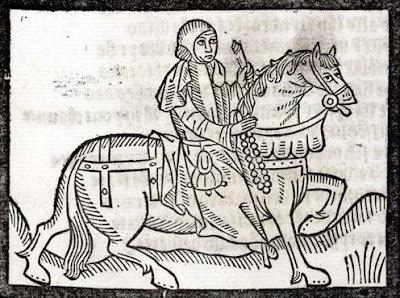 Picture: The Man of Law (Sargeant at Law) from The Canterbury Tales by Geoffrey Chaucer printed by Richard Pynson, London: 1492

From 1463 to 1465, a severe epidemic of plague hit the entire kingdom. In 1467 another epidemic swept through parts of England, and was possibly national in scope.

The following extracts indicate that William Morland was active in buying, selling and renting property during the 1460s, the early years of Edward IV reign.

"16. Robert Kirkeham, clerk, keeper of the rolls of Chancery of the lord the King, John Catesby, one of the serjeants-at-law, and William Morland, clerk, and Henry Waver, citizen and draper of London, and Cristina, his wife. Premises in Chelcheheth. Anno 5. (1466)"

Another extract also shows him busy with property.

"By 1465 Henry Waver was in possession of property in Chelsea and he and Christine granted to Master Robert Kirkham, Keeper of the Chancery Rolls, John Catesby, sergeant-at-law, and William Morland, clerk, two messuages in Chelsea, one newly-built with an enclosed garden, and the other adjoining in which Peter Carpenter lived, rendering 4d. a year to Waver, and with a warranty against Christine's heirs. It was quitclaimed to the three and to the heirs of Kirkham by two Londoners, probably feoffees."

We know from his will that he was lawyer in the Chancery court.

The title of the office of "Master of the Rolls" derives from the fact that originally, the office-holder was a clerk responsible for keeping the "Rolls," or records, of the Chancery court.

The Keeper or "Master of the Rolls" and Records of the Chancery of England, is the third most senior judge of England and Wales, the Lord Chancellor of Great Britain traditionally being first and the Lord Chief Justice second.

The name William Morland also is given (for the same period) as the Warden of the Domus conversorum, a hospital for Jews who had been converted to Christianity in New Street, the present Chancery Lane in the city of London. This is because the house was annexed for ever to the Mastership of the Rolls in 1377.

The accounts of the wardens and the grants occasionally made to converts show that the house was used for its original purpose for more than two centuries longer. The number of inmates was, however, always very small: in the second year of Henry V (1415) there were eight converts, but often there were not more than two.

According to "Biographical illustrations of St. Paul's cathedral" By George Lewis Smyth published in 1843, In 1476 William Morland was appointed to be the Prebend of Ealdland of St Pauls Cathedral.

A prebend is a type of benefice, which usually consisted of the income from the cathedral estates, in this case his allowance was drawn from the tithes at Ealdland near Tillingham in Essex. It was valued in the King's books at five pounds per annum.

The Prebendry of Ealdland seems to be on the 'tick list' of rising royal and church servants. The man before Benedict Burgh who was Prebend of Ealdland was Richard Martyn. He had been archdeacon of London in 1469. In 1471 he was one of the King's councillors in Wales and became chancellor of the marches. He was a diplomat sent on missions to Scotland, Burgundy and Spain. He became Lord Chancellor of Ireland and was consecrated Bishop of St Davids in 1483. The politics of the time were turbulent and he was first deprived of his living and reinstated following his support of Richard duke of Gloucester's usurpation of the crown.

Other details from William Morland's life indicates that he was a valued royal servant and that he continued to accrue benefices and influence during his life.

1484 April 26. Nottingham. Grant to William Morland, one of the clerks of Chancery, of 10 pounds yearly at the receipt of the Exchequer until he shall be promoted by the king to an ecclesiastical benefice of the value of 20 pounds yearly.

There are many mentions of William Morland in the archives of the Public Record Office. These are mainly law suites and fines in which he was involved.

Sometime between 1475 and 1485 a certain William Monkey, servant to Master William Morland who was then described as a master in Chancery was taken to court by the mayor and aldermen of London.: They alledged procedure in an action, contrary to the privilege of Chancery. The case was heard before the Lord Chancellor, the Bishop of Lincoln.

One case stands out. Some time when Thomas Angewyn was Abbot of Chertsey, either between in 1461 and 1462 or more likely in either 1464 or 1465 he was involved in a case brought before the Lord Chancellor over the enclosure of 'Benehyll' common. He was fighting for something in his home Parish.
http://www.nationalarchives.gov.uk/catalogue/displaycataloguedetails.asp?CATLN=7&CATID=-2418919


William Morland died in 1492 when his will was proved.

To be buried in the Low Chapel of St. Mary under the Chapel Royal of Stephen Prothemartyr in Westminister in prescence of the Chaplain of said Low Chapel of St Mary and Masters John Fowkes sometime clerk of said Chapel of St Stephen, Benedict Burgh (and other dignitaries). My two volumes MSS to the said chapel of St. Stephen and to the Minister there for my burial. Also my book called Henry Harpe. To Master William Kelett clerk my kinsman my book of Statutes and my Register of Briefs in Chancery. To John Chapman my server 10 pounds. To --------- Philipp my server 50 shillings. To Robert Brown 25 shillings and 8 pennies. To William Lewen chaplain to pray for my soul 20 shillings. and to said Master William Kelett my kinsman for his life all my lands and tenements freehold by Custom of the Manor in town and parish of Sutton, Surrey the remainder to Henry Morland son of Hugh Morland my kinsman and his heirs. If said Henry die before William Kelett then reversion to said Hugh Morland at death of William Kelett. Also all my residue to Hugh Morland my sole Executor."

The 5 books that William Morland left in his will (Two volumes left to the chapel of St. Stephen, his book called "Henry Harpe" and the book of Statutes and the Register of Briefs in Chancery) represent a great amount of money. The labour involved in producing books made them very expensive indeed. Each volume of lambskin parchment represented a whole flock of sheep - so publication, such as it was outside the monasteries, basically meant lending a manuscript to another scholar, handing it to a copyist or getting a famous person to comment on it.

But William Morland was a lawyer as well as a priest and so this may have been a books of hours, a psalter or simply a text book of laws.