In Wykehams Register published in 1896 (page 97) there is mention of a commission in 1377 to Robert de Wyndesore, prior of Merton to institute John Peyntour of Lodegersale to the church of Sutton.

During the thirteenth and fourteenth centuries the abbey was engaged in many disputes, the settlement of which, involving litigation and papal arbitration, must have greatly taxed its already diminishing resources. Finally in the case of disputes involving but slight issues the house resorted to less official mediation 'in order to save extortion.'

It is highly likely that John Peyntour would have seen some of his parishioners join the great revolt of 1381. Chertsey abbey is said to have been attacked during the peasants revolt.

"In 1378 the 'Confederation of serfs of Chobham, Thorpe and Egham' was formed, which preceded the large insurrection of 1381. The words "long rebelliously withdrawn the customary services due to the Abbot" and "bound themselves by oath to resist the Abbot" are recorded. In 1381 the tenancy record books at Chertsey Abbey were burned by peasants wishing to erase records of their duties to the Abbey."

"The record states that the court rolls and other muniments were burnt by the malice and rebellion of the insurgents against the peace of the king. "

The peasants in their revolt of 1381 wreaked havoc in London, only 12 miles away. The rebels demolished the home of John of Gaunt and buildings around the priory of the hospital of St John. The prior of the Hospitallers was the royal treasurer. The prior, along with the Archbishop of Canterbury and other notables were beheaded. The congregation of Sutton would have heard about how the Archbishop's head was stuck on a pike on London Bridge with his mitre nailed to his skull. 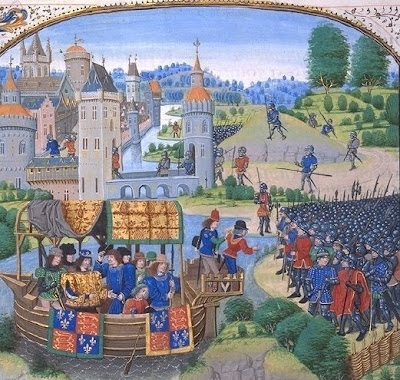 London was afflicted in 1382 with plague, with Kent and others parts in 1383. (Source: CREIGHTON, Charles (1965), A History of Epidemics in Britain Vol I: From AD 664 to the Great Plague (2nd ed), with additional material by DEC Eversley, EA Underwood, and L Ovenall, London: Frank Cass)

With the general breakdown in authority came heresies. In England the Lollards, who preached religious reform, were burned at the stake.

Please note that photographs and footage may be taken throughout any event organised by the Friends of St Nicholas Churchyard. These will be used by the Friends of St Nicholas Churchyard for marketing and publicity in our publications, on our website and in social media or in any third party publication. Please contact us if you have any concerns or if you wish to be exempted from this activity.