Shewe me a peny. Whose ymage and superscripcio hath it? They answered and sayde: Cesars. 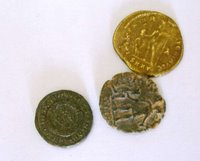 I bought these coins in a Barcelona flea market. The coins are of the Emperors Licinius, Constantine and Arcadius and link Sutton with the Eastern Roman Empire.
The top coin is of Licinius ruler of the east from 308 to 324. He mostly tolerated Christians at the start and during his early rule a wealthy man called Nicholas rose to become Bishop of the City of Myra.

The coin of the left is of Constantine, declared Emperor in the province of Britannia. He killed his rival in battle in 312 to become ruler of the West. He claimed to have received the blessing of the God of the Christians and after hearing the heavenly command "In this sign you shall conquer" he ordered the first two letters of the Greek word for Christ (X and P) painted onto his soldiers shields. The church changed from being seen as tolerated losers into the sponsors of ascendant power.

In 312 Licinius and Constantine met in Milan and agreed the Edict of Milan, granting full tolerance to Christianity. This was a good time for the Church. Nicholas of Myra used his great family wealth and influence to force the closure of several Pagan temples at the same time made sure the church took care of the poor. The pattern was repeated all over the empire. The bishops arranged things like mafia dons. They organised, they planned and they were ruthlessly efficient. They wanted the world turned to Christ.

In 320 Licinius broke the Edit of Milan and renewed the persecution of the Church. The Emperors came to war. The Church sided with Constantine who championed equally his ambition and Christ. Licinius vainly hoped to catch an advantage in a pagan backlash against the Church. Licinius was captured, and murdered while under house arrest.

Constantine was master of the world and the Church of Christ flowered. But in its sudden grow it split. Arius the Bishop of Alexandria attracted a group within the church by asserting that Jesus was not divine. Constantine was alarmed. Not a baptised Christian himself Constantine nevertheless believed his power came from his relationship with God. He called a conference in Nicea in 324 to confirm Church doctrines. Arius rose to speak. Nicholas of Myra was so outraged at what he heard that he punched his fellow bishop full in the face.

It is worth reminding ourselves that the brawling ruthless Bishop Nicholas is a saint, and in the Orthodox churches so is the murderous Emperor Constantine.
And the middle coin? This is of Arcadius, Emperor of the East from 377 to 408. He has a sad reputation of being a good Christian but a weak Emperor at a time when the Roman and Christian world was shrinking. By 407 in the province of Britannia no new Roman coins were going into circulation. An end had come.

Another ending in 1066 saw a different ascendancy. William of Normandy had the throne of England. William's Domesday survey was completed in 1086. Sudtone had its place in history. Normans had conquered southern Italy and the bones of Nicholas had been stolen and brought to Bari in 1087.

The wonderworking Bishop pleased the Normans and his cult spread rapidly through England. By the time that Nicholas de Heddeshore arrived in 1291 as the first recorded Rector of Sudtone, St Nicholas of Bari had his place as well.